Give the Dog a Bone

I just love this game - Give The Dog a Bone.

I use it on the interactive whiteboard and the children would play it forever! You could also use it individually on computers but the children love performing in front of each other trying to beat their friends.

The game consists of a blank 100 chart. There are ten bones hidden in the chart. The player is given a number on the chart where the bone is hidden. They have to tap on the space where they think that number would be. If they are correct, the bone is revealed and the next number is given. If they are not correct, the number is revealed and the player can use that number to guide them to the correct space. Play continues for one minute and the player must reveal ten bones to win.

I have played this with children in my classroom for several years and it has always been really popular. In fact, parents have trouble getting their children to leave school in the afternoon, they are so keen to have an extra go!

This is an outstanding game to familiarise children with the numbers 1 - 100. They quickly learn the relative positions of the numbers, and  to add and subtract 1 and 10. 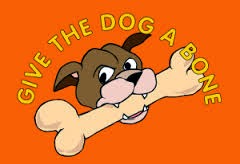 Email ThisBlogThis!Share to TwitterShare to FacebookShare to Pinterest
Labels: addition strategies, Give The Dog a Bone., mental strategies, mental math, number to 100